"Hush, Little Baby" is a traditional lullaby, thought to have been written in the Southern United States. Like most folk songs, the author and date of origin are unknown. The lyrics promise all kinds of rewards to the child if they are quiet. The simple structure allows more verses to be added ad lib.

The song has been performed and recorded by many artists including Joan Baez, Burl Ives, Regina Spektor, Nina Simone, The Weavers and the Mormon Tabernacle Choir. Additionally, the song has been adapted into pop songs such as 's "Hambone", Inez and Charlie Foxx's "Mockingbird" and Bo Diddley's eponymous song "Bo Diddley", as well as Bobby McFerrin and Yo-Yo Ma's "Hush Little Baby" and Eminem's "Mockingbird".

Aretha Franklin, Carly Simon, James Taylor, Etta James, Taj Mahal and Dusty Springfield have each recorded "Mockingbird", which is an R&B variant of the song. "Mockingbird" was featured humorously as a car travel song in the films National Lampoon's Vacation (1983) and Dumb & Dumber (1994).

"Hush Little Baby" has also been used in the play The Miracle Worker, about Helen Keller and Annie Sullivan.

2016 saw this song recorded by violinist Vov Dylan for the album World Lullabies which is acting as a fundraiser for Starlight Foundation.[1]

There are a multitude of different versions of the song. It has a simple structure consisting of a series of rhyming couplets, where a gift is given to the little baby. In the next couplet, the gift is found faulty in some way, and a new gift is presented. The song continues in this pattern as long as the singer likes; and can come up with new gifts that fit the rhyming pattern. An example of some common couplets used in the song:

And if that mockingbird don't sing,
Mama's gonna buy you a diamond ring.

And if that diamond ring turns brass,
Mama's gonna buy you a looking glass.

And if that looking glass gets broke,
Mama's gonna buy you a billy goat,

And if that billy goat get cross,
Mama's gonna buy you a rocking horse.

And if that rocking horse turns over,
Mama's gonna buy you a dog named Rover.

And if that dog named Rover won't bark,
Mama's gonna buy you a horse and a cart.

And if that horse and cart fall down,
You'll still be the sweetest little baby in town. 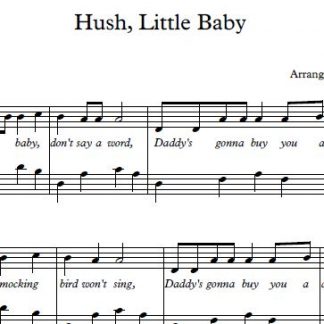