1818 Christmas song by Franz Gruber and Joseph Mohr
This article is about the Christmas carol. For other uses, see Silent Night (disambiguation).

"Silent Night" (German: "Stille Nacht, heilige Nacht") is a popular Christmas carol, composed in 1818 by Franz Xaver Gruber to lyrics by Joseph Mohr in the small town of Oberndorf bei Salzburg, Austria.[1] It was declared an intangible cultural heritage by UNESCO in 2011.[2] The song has been recorded by many singers across many music genres. The version sung by Bing Crosby in 1935 has sold 10 million copies as a single.[3]

"Stille Nacht" was first performed on Christmas Eve 1818 at St Nicholas parish church in Oberndorf, a village in the Austrian Empire on the Salzach river in present-day Austria. A young Catholic priest, Father Joseph Mohr, had come to Oberndorf the year before. In the aftermath of the Napoleonic Wars,[1] he had written the poem "Stille Nacht" in 1816 at Mariapfarr, the hometown of his father in the Salzburg Lungau region, where Joseph had worked as an assistant priest.[4]

The melody was composed by Franz Xaver Gruber, schoolmaster and organist in the nearby village of  [de], now part of Lamprechtshausen. On Christmas Eve 1818, Mohr brought the words to Gruber and asked him to compose a melody and guitar accompaniment for that night's mass, after river flooding had possibly damaged the church organ.[1][5] The church was eventually destroyed by repeated flooding and replaced with the Silent-Night-Chapel. It is unknown what inspired Mohr to write the lyrics, or what prompted him to create a new carol.[4]

According to Gruber, Karl Mauracher, an organ builder who serviced the instrument at the Oberndorf church, was enamoured of the song, and took the composition home with him to the Zillertal.[6] From there, two travelling families of folk singers, the Strassers and the Rainers, included the tune in their shows. The Rainers were already singing it around Christmas 1819, and once performed it for an audience that included Franz I of Austria and Alexander I of Russia, as well as making the first performance of the song in the U.S., in New York City in 1839.[1] By the 1840s the song was well known in Lower Saxony and was reported to be a favourite of Frederick William IV of Prussia. During this period, the melody changed slightly to become the version that is commonly played today.[4][6]

Over the years, because the original manuscript had been lost, Mohr's name was forgotten and although Gruber was known to be the composer, many people assumed the melody was composed by a famous composer, and it was variously attributed to Haydn, Mozart, or Beethoven.[4] However, a manuscript was discovered in 1995 in Mohr's handwriting and dated by researchers as c. 1820. It states that Mohr wrote the words in 1816 when he was assigned to a pilgrim church in Mariapfarr, Austria, and shows that the music was composed by Gruber in 1818. This is the earliest manuscript that exists and the only one in Mohr's handwriting.[7]

The first edition was published by  [de] in 1833 in a collection of Four Genuine Tyrolean Songs, with the following musical text:[8] 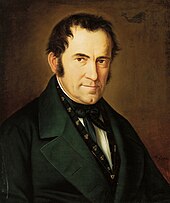 The contemporary version, as in the choral example below, is:

In 1859, the Episcopal priest John Freeman Young, then serving at Trinity Church, New York City, wrote and published the English translation that is most frequently sung today, translated from three of Mohr's original six verses.[9] The version of the melody that is generally used today is a slow, meditative lullaby or pastorale, differing slightly (particularly in the final strain) from Gruber's original, which was a "moderato" tune in 6
8 time and siciliana rhythm.[10][11] Today, the lyrics and melody are in the public domain, although newer translations usually are not.

The carol has been translated into about 140 languages.[13] 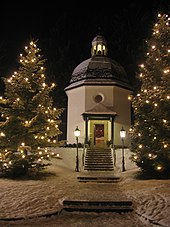 Max Reger quotes the tune in the Christmas section of his organ pieces Sieben Stücke, Op. 145.

Alfred Schnittke composed an arrangement of "Stille Nacht" for violin and piano in 1978, as a holiday greeting for violinist Gidon Kremer. Due to its dissonant and nightmarish character, the miniature caused a scandal in Austria.[16][17]

Several theatrical and television films depict how the song was ostensibly written. Most of them report the organ breaking down at the church in Oberndorf, which appeared in a fictional story published in the U.S. in the 1930s.[5]

Several recordings of "Silent Night" have reached the record charts in various countries. These include: 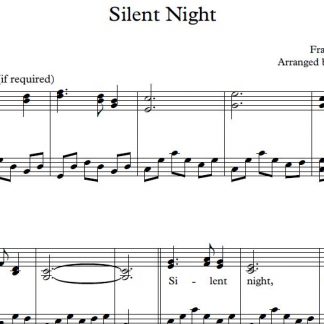