"The Skye Boat Song" is a late 19th-century Scottish song recalling the journey of Prince Charles Edward Stuart (Bonnie Prince Charlie) from Benbecula to the Isle of Skye as he evaded capture by government troops after his defeat at the Battle of Culloden in 1746.

Sir Harold Boulton, 2nd Baronet composed the lyrics to an air collected by Anne Campbelle MacLeod in the 1870s, and the line "Over the Sea to Skye" is now a cornerstone of the tourism industry on the Isle of Skye.

Alternative lyrics to the tune were written by Robert Louis Stevenson, probably in 1885. After hearing the Jacobite airs sung by a visitor, he judged the words of this song to be "unworthy", so made a new set of verses "more in harmony with the plaintive tune".[1]

It is often played as a slow lullaby or waltz, and entered into the modern folk canon in the twentieth century with versions by Paul Robeson, Tom Jones, Rod Stewart, Roger Whittaker, Tori Amos, and many others.

The text of the song gives an account of how Bonnie Prince Charlie, disguised as a serving maid, escaped in a small boat after the defeat of his Jacobite rising of 1745, with the aid of Flora MacDonald. The song draws on the motifs of Jacobitism although it was composed nearly a century and a half after the episode it describes.[2] It is often supposed that it describes Charles's flight from the mainland, but this is unhistorical. The only time Charles was in Skye was when he left Benbecula in the Outer Hebrides to avoid the increasingly thorough government searches.

The lyrics were written by Sir Harold Boulton, 2nd Baronet, to an air collected in the 1870s by Anne Campbelle MacLeod (1855–1921), who became Lady Wilson by marriage to Sir James Wilson, KSCI (1853–1926), in 1888. The song was first published in Songs of the North by Boulton and MacLeod, London, 1884, a book that went into at least twenty editions.[2] In later editions MacLeod's name was dropped and the ascription "Old Highland rowing measure arranged by Malcolm Lawson" was substituted. It was quickly taken up by other compilers, such as Laura Alexandrine Smith's Music of the Waters (published 1888). Lawson was the elder brother of artist Cecil Gordon Lawson.

According to Andrew Kuntz, a collector of folk music lore, MacLeod was on a trip to the isle of Skye and was being rowed over Loch Coruisk (Coire Uisg, the "Cauldron of Waters") when the rowers broke into a Gaelic rowing song "Cuachag nan Craobh" ("The Cuckoo in the Grove"). MacLeod set down what she remembered of the air, with the intention of using it later in a book she was to co-author with Boulton, who later added the section with the Jacobite associations. "As a piece of modern romantic literature with traditional links it succeeded perhaps too well, for soon people began 'remembering' they had learned the song in their childhood, and that the words were 'old Gaelic lines'," Andrew Kuntz has observed.[3]

The song was not in any older books of Scottish songs, though it is in most collections like The Fireside Book of Folk Songs. It is often sung as a lullaby, in a slow rocking 6/8 time.

It was extremely popular in its day, and from its first recording by Tom Bryce on April 29, 1899,[4] became a standard among Scottish folk and dance musicians. It was even more widely known from the 1960s onwards and has remained popular in mainstream music genres.

Michael Tippett originally included the song, titled as "Over the Sea to Skye", in his arrangements of Four Songs from the British Isles for unaccompanied four-part chorus in 1957, commissioned by North West German Radio, Bremen,[clarification needed] for a festival of European folk song. The amateur choir for which they were intended found the songs too difficult, and the first performance took place in July 1958, given by the London Bach Group, conducted by John Minchinton, at Royaumont in France. Tippett's Selected Letters states that he proposed to replace "Over the Sea to Skye" because it was "too strictly held by a publisher here".[citation needed]

Alfred Deller recorded a version for his album Western Wind in 1958, together with Desmond Dupré on guitar and John Sothcott on recorder. It was performed to great acclaim and recorded by artist and social activist Paul Robeson in 1959 and 1960.[5]

Welshman Tom Jones recorded a version, which was arranged by Lee Lawson and Harold Boulton, on his debut album Along Came Jones in 1965. The same album, released in the U.S. as It's Not Unusual (and carrying only 12 of the original 16 tracks), did not give attribution for the arrangement but did characterise the song as "Trad.—2:57."[6] Esther & Abi Ofarim recorded the song in 1966 under the title "Bonnie Boat".[7]

Rangers FC and Doctor Who

Fans of Rangers FC in Glasgow used to sing a version of the song in praise of Danish player Kai Johansen (played 1965–70). Patrick Troughton, as the second Doctor on the British science-fiction television series Doctor Who, played the song repeatedly on his recorder in episode 6, scene 10 of "The Web of Fear" (broadcast 9 March 1968).[8][9]

Among later renditions which became well known were Peter Nelson and The Castaways from New Zealand, who released a version in 1966, as did West Australian artist Glen Ingram. Both versions were in the Australian hit parade in 1966.[citation needed] A tough garage rock version of the song by a New Guinean band The Stalemates was included on the Viking Records compilation The New Guinea Scene in 1969.[10]

Calum Kennedy included a version on Songs of Scotland and Ireland (Beltona 1971), and Rod Stewart recorded two versions of the song with The Atlantic Crossing Drum & Pipe Band during the sessions for Atlantic Crossing between 1974 and 1975. They were given an official release on the deluxe re-release of the album in 2009.

"The Skye Boat Song" can be heard at the beginning of "Who Stole the Bagpipes", the second episode in season one of the early 1980s British cartoon Dangermouse. Roger Whittaker's duet version with Des O'Connor, released in 1986, made the UK top 10; it combined O'Connor's vocals with Whittaker's whistling version, a part of his repertoire since at least the mid-1970s. The track was recorded at London's Holland Park Lansdowne Studios (now a high-end residential underground property) with session drummer Peter Boita along with all the high-profile studio session players of the day. The cellist Julian Lloyd Webber recorded an instrumental version of the song in 1986 on the album Encore!.

In the 1987 horror movie, It's Alive III: Island of the Alive, the main character played by Michael Moriarty sings the song onboard a boat with crew members at 46 mins 17 secs.

The Shadows played an instrumental version of the song on their 1987 album Simply Shadows. Singer Tori Amos covered the song as part of a song trilogy entitled "Etienne Trilogy" on her debut album Y Kant Tori Read (1988). James Galway and The Chieftains recorded an instrumental version (which was used as background music for a Johnnie Walker commercial) in February 1990 at Studios 301, Sydney, Australia, released on the album Over the Sea to Skye - The Celtic Connection. There is also a version on The Corries In Concert / Scottish Love Songs album (track 19). Galway plays the instrumental version on episode 1957 of Sesame Street, originally aired in 1984.

Scottish singer Barbara Dickson recorded the song in 2006, and Marc Gunn included it on his 2013 album Scottish Songs of Drinking & Rebellion.[citation needed]

Bear McCreary adapted the song as the opening titles of the 2014 TV series Outlander, sung by Raya Yarbrough, changing the text of Robert Louis Stevenson's poem "Sing Me a Song of a Lad That Is Gone" (1892) to "Lass" to fit the story.[2][11][12]

It can also be heard as background instrumental music in several episodes of the American serial killer television series Dexter.[citation needed] Peter Hollens recorded an a capella cover of the song for the 2018 album Legendary Folk songs.[13]

It's sung by the character Claire Louise McLeod (played by Lisa Chappell) on season 1, episode 5, "Taking the Reins" of the Australian TV series McLeod's Daughters.[citation needed]

[Chorus:]
Speed, bonnie boat, like a bird on the wing,
Onward! the sailors cry;
Carry the lad that's born to be king
Over the sea to Skye.

1. Loud the winds howl, loud the waves roar,
Thunderclaps rend the air;
Baffled, our foes stand by the shore,
Follow they will not dare.

2. Many's the lad, fought in that day
Well the claymore did wield;
When the night came, silently lay
Dead on Culloden's field.

3. Though the waves leap, soft shall ye sleep,
Ocean's a royal bed.
Rocked in the deep, Flora will keep
Watch by your weary head.

4. Burned are their homes, exile and death
Scatter the loyal men;
Yet ere the sword cool in the sheath
Charlie will come again.

Robert Louis Stevenson's 1892 poem, which has been sung to the tune, has the following text:[14]

[Chorus:] Sing me a song of a lad that is gone,
Say, could that lad be I?
Merry of soul he sailed on a day
Over the sea to Skye.

1. Mull was astern, Rum on the port,
Eigg on the starboard bow;
Glory of youth glowed in his soul;
Where is that glory now?

There has also been a hymn adaptation of the tune, known as "Spirit of God Unseen as the Wind"; some of the lyrics vary.[15][16]

"The Skye Boat Song" has been parodied in song by Dawn French and Jennifer Saunders on their comedy series French and Saunders.[citation needed] 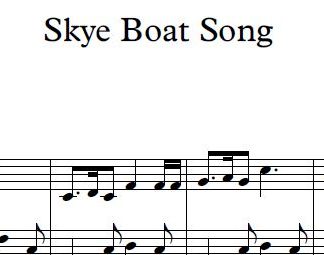