"Twinkle, Twinkle, Little Star" is a popular English lullaby. The lyrics are from an early-19th-century English poem by Jane Taylor, The Star. The poem, which is in couplet form, was first published in 1806 in Rhymes for the Nursery, a collection of poems by Taylor and her sister Ann. It is sung to the tune of the French melody "Ah! vous dirai-je, maman", which was published in 1761 and later arranged by several composers, including Mozart with Twelve Variations on "Ah vous dirai-je, Maman".[1] The English lyrics have five stanzas, although only the first is widely known. It has a Roud Folk Song Index number of 7666. This song is usually performed in the key of C major.

The song is in the public domain,[2] and has many adaptations around the world.[3]

TWINKLE, twinkle, little star,
How I wonder what you are!
Up above the world so high,
Like a diamond in the sky.

When the blazing sun is gone,
When he nothing shines upon,
Then you show your little light,
Twinkle, twinkle, all the night.

Then the trav’ller in the dark,
Thanks you for your tiny spark,
He could not see which way to go,
If you did not twinkle so.

In the dark blue sky you keep,
And often thro’ my curtains peep,
For you never shut your eye,
Till the sun is in the sky.

‘Tis your bright and tiny spark,
Lights the trav’ller in the dark,
Tho’ I know not what you are,
Twinkle, twinkle, little star.

The lyrics from "The Star" were first published with the tune in The Singing Master: First Class Tune Book in 1838.[4] Although before, when it was just a folk song, there were only 4 verses[4]

The lyrics of the song are the text of the poem, with the first two lines of the entire poem repeated as a refrain after each stanza. For instance, the first stanza of the lyrics is:

The first stanza of the song is typically as written, but further stanzas typically contain minor variations.

sheet music from Song Stories for the Kindergarten[6]

Additional variations exist such as from 1896 in Song Stories for the Kindergarten[6] by Mildred J. Hill.

Twinkle, twinkle, little star,
How we wonder what you are.
Up above the world so high,
Like a diamond in the sky.

When the glorious sun has set,
And the grass with dew is wet,
Then you show your little light,
Twinkle, twinkle, all the night.

When the golden sun doth rise,
Fills with shining light the skies,
Then you fade away from sight,
Shine no more 'till comes the night.

An adaptation of the song, named "Twinkle, Twinkle, Little Earth", was written by Charles Randolph Grean, Fred Hertz and Leonard Nimoy. It is included on Nimoy's first 1967 album Leonard Nimoy Presents Mr. Spock's Music from Outer Space, with him reciting the text as Spock explaining how the star-people wish upon an earth and so forth.[8]

The tune of the "Alphabet song" is identical to "Twinkle, Twinkle, Little Star".

The song can also be played as a singing game. 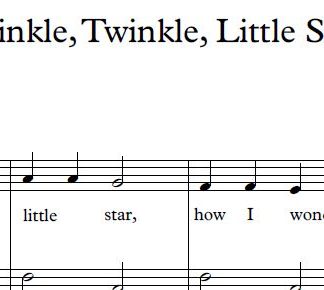