When the Saints Go Marching In – Piano

"When the Saints Go Marching In", often referred to as simply "The Saints", is a black spiritual.[1] Though it originated as a Christian hymn, it is often played by jazz bands. This song was famously recorded on May 13, 1938, by Louis Armstrong and his orchestra.[2]

The song is sometimes confused with a similarly titled composition "When the Saints Are Marching In" from 1896 by Katharine Purvis (lyrics) and James Milton Black (music).[3] 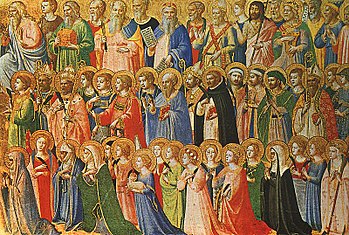 The Forerunners of Christ with Saints and Martyrs, a painting by Fra Angelico, 15th century

The origins of this song are unclear.[3] It apparently evolved in the early 1900s from a number of similarly titled gospel songs, including "When the Saints Are Marching In" (1896) and "When the Saints March In for Crowning" (1908).[4] The first known recorded version was in 1923 by the Paramount Jubilee Singers on Paramount 12073. Although the title given on the label is "When All the Saints Come Marching In", the group sings the modern lyrics beginning with "When the saints go marching in". No author is shown on the label. Several other gospel versions were recorded in the 1920s, with slightly varying titles but using the same lyrics, including versions by The Four Harmony Kings (1924), Elkins-Payne Jubilee Singers (1924), Wheat Street Female Quartet (1925), Bo Weavil Jackson (1926), Deaconess Alexander (1926), Rev. E. D. Campbell (1927), Robert Hicks (AKA Barbecue Bob, 1927), Blind Willie Davis (1928), and the Pace Jubilee Singers (1928).[5]

The earliest versions were slow and stately, but as time passed, the recordings became more rhythmic, including a distinctly uptempo version by the Sanctified Singers on British Parlophone in 1931.

Even though the song had folk roots, a number of composers claimed copyright in it in later years, including Luther G. Presley[6] and Virgil Oliver Stamps,[7] R. E. Winsett.[8] The tune is particularly associated with the city of New Orleans. A jazz standard, it has been recorded by many jazz and pop artists.

As with many numbers with long traditional folk use, there is no one "official" version of the song or its lyrics. This extends so far as confusion as to its name, with it often being mistakenly called "When the Saints Come Marching In". As for the lyrics themselves, their very simplicity makes it easy to generate new verses. Since the first and second lines of a verse are exactly the same, and the third and fourth are standard throughout, the creation of one suitable line in iambic tetrameter generates an entire verse.

It is impossible to list every version of the song, but a common standard version runs:

Often the first two words of the common third verse line ("Lord, how I want...") are sung as either "Oh how", "Oh, Lord" or even "Lord, Lord" as to the simple melody at each third line.

Arrangements vary considerably. The simplest is just an endless repetition of the chorus. Verses may be alternated with choruses, or put in the third of four repetitions to create an AABA form with the verse as the bridge.

Some traditional arrangements often have ensemble rather than individual vocals. It is also common as an audience sing-along number. Versions using call and response are often heard, e.g.:

The response verses can echo the same melody or form a counterpoint melody, often syncopated opposite the rhythm of the main verses, and a solo singer might sing another counterpoint melody (solo soprano or tenor) as a 3rd part in more complex arrangements.

Analysis of the traditional lyrics

The song is apocalyptic, taking much of its imagery from the Book of Revelation, but excluding its more horrific depictions of the Last Judgment. The verses about the Sun and Moon refer to Solar and Lunar eclipses; the trumpet (of the Archangel Gabriel) is the way in which the Last Judgment is announced. As the hymn expresses the wish to go to Heaven, picturing the saints going in (through the Pearly Gates), it is entirely appropriate for funerals. 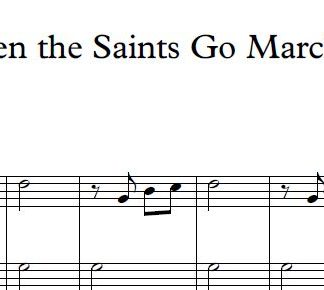